Work is already underway for the third series of popular Icelandic TV series Trapped (Ófærð), RÚV reports. The first episode of the second season of Trapped is scheduled to air on December 26 in Iceland on national broadcast service RÚV. Further announcements are expected in the near future, but there appear to be no set dates for Trapped schedules in other countries at the moment. Inquire locally for further information regarding broadcasting dates in your country.

According to show director Baltasár Kormákur, the second series has already been sold to numerous countries, including United Kingdom, Germany, France, Australia, as well as the whole of Scandinavia. “I can keep counting up countries like this all night, it’s so many different territories. Everybody who had the first series bought it again, and well over that”, Baltasar stated.

Preliminary work on the third series is already underway according to Baltasar, “We have started writing the framework for the third season. We haven’t gotten farther than that. We want to be able to release the third series earlier than the second, if it goes as well as it looks like with the second series, so there isn’t such a long time between series. There’s still a huge story left in these characters”.

The production of the second series was greater in magnitude than the first one, and expenditures were in excess of 1 billion ISK (8.2 million $, 7.2 million €), according to head writer Sigurjón Kjartansson.

Readers are warned that there might be mild spoilers ahead:
The story was expanded somewhat for the second series. “It’s not built completely in this narrow space like in the first series, which was this little town where roads were impassable and nobody could get out. In this series the problems lie in the characters’ inner life,” Sigurjón stated. He continued, “We go a little into the town, though, and we stick to Siglufjörður and the surrounding areas.”

Previously, it had been revealed that the plot would revolve around an attack on an Icelandic government minister, as well as tackling big topics such as nationalism, imported labour and heavy industry.

Trapped is a crime drama which follows the actions of police officer Andri Ólafsson (Ólafur Darri Ólafsson). The first series took place in a remote town in Iceland as a blizzard hit. The first series of Trapped was widely successful, enjoying 5.7 million viewers in France and 1.2 million in Britain where it was broadcast on BBC 4. 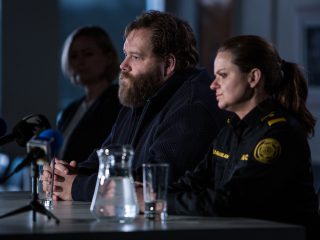 What Is the Current Status of Trapped: Season Three?